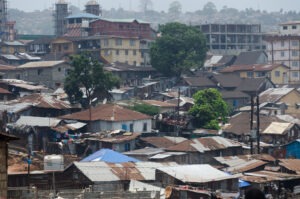 Sierra Leone is a small country on the West Coast of Africa. Wedged in-between Guinea and Liberia, it has a tropical climate with two distinct seasons (dry and rainy). Sierra Leone has a diverse environment ranging from savanna to rain forests. It also has rated some of the best beaches in the world and is rich in natural resources (like: iron, bauxite, gold, diamonds, etc).

Sierra Leone is a constitutional democracy with an elected president. The current president Julius Maada Bio was peacefully re-elected in 2018. The government is seated in Freetown, the capital city. Freetown is located in the Western Area district and is the biggest city of the country. It has a population of an estimated 800.000 residents (2017 World Population Review) and is the business center of the country.

Sierra Leone was named in 1462 by the Portuguese explorer Pedro de Sintra, who named it Serra Leoa, meaning “Lioness Mountains”. In later years, Sierra Leone became an important center of the transatlantic slave trade, until Freetown was established in 1792 by the Sierra Leone Company. The city then became a home for former slaves (therefore, the name Freetown). In 1808, Freetown became a British Crown Colony. In 1961, Sierra Leone gained its independence and successive governments led up to a civil war. The war raged from 1991 until 2002 and was especially known in the rest of the world for the brutal practice of amputations. Today, Sierra Leone is still ranked as one of the poorest nations on earth with the worst life expectancy in the world (51.3 average age expectancy according to UNDP Human Development Reports 2016).
However, since the end of the civil war, Sierra Leone has begun rebuilding and the economy has shown a steady growth ever since. 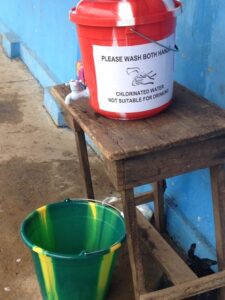 The Ebola outbreak in March 2014 in Guinea West-Africa was the largest and most complex Ebola outbreak since the Ebola virus was first discovered in 1976. In May 2014, it was spread to Sierra Leone. It is thought that fruit bats are natural Ebola virus hosts. Ebola is introduced into the human population through close contact with the blood, feces and urine, organs or other bodily fluids of infected animals. Ebola then spreads through human-to-human transmission via direct contact with the blood, feces and urine, organs or other bodily fluids of infected people, and through surfaces and materials (e.g. bedding, clothing) contaminated with these fluids. Burial ceremonies in which mourners have direct contact with the body of the deceased person can also play a role in the transmission of Ebola as an infected dead body is highly contagious. People remain contagious as long as their blood and body fluids, including semen and breast milk, contain the virus. Men who have recovered from the disease can still transmit the virus through their semen for up to 7 weeks after recovery from illness. The incubation period, that is the time interval from infection with the virus to onset of symptoms, is 2 to 21 days. Humans are not contagious until they develop symptoms. First symptoms are the sudden onset of fever, fatigue, muscle pain, headache and sore throat. This is followed by vomiting, diarrhoea, rash, symptoms of impaired kidney and liver function, and in some cases, both internal and external bleeding. There is as yet no proven treatment available for Ebola. However, a range of potential treatments including blood products, immune therapies and drug therapies are currently being evaluated (at time of writing). The population of Sierra Leone is roughly estimated around 7.09 million people (different organisations give different numbers). The population consists of 16 different ethnic groups. The two main groups are the Temne and the Mende. The most widely spoken language is Krio (although it is not the official language, it is spoken throughout most of Sierra Leone). The official language is English, which is spoken in government institutions and businesses.

Sierra Leone is considered mainly a Muslim country (about 60%). Christians make up about 30% and about 10% follow a more indigenous belief system. However, religion in Sierra Leone is often considered a rather fluid notion and therefore it is not uncommon to meet Christians who also support Islam and vice versa. Many also incorporate the traditional believes within Christianity and Islam. Sierra Leone does not experience religious tensions. Most people respect the religion of the other and mixed religious views within marriages and families are common. 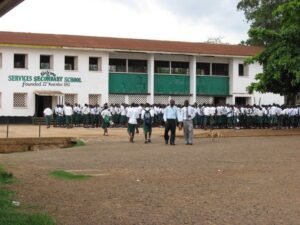 Sierra Leone’s population is very young at average, with an estimated 41% under 15 and 39% between 15 and 35. Most people live in rural areas, but with an urbanisation trend of 3%, the country is becoming more urban. As a result, the city services are under a lot of pressure.

Education in Sierra Leone is obligatory for all children and officially “free of charge”. The education norm is to receive at least six years at primary level and three years in junior secondary education. But a shortage of schools and teachers, and a general lack of resources have made this implementation extremely hard.

Two-third of the adult population in Sierra Leone is illiterate. During the civil war, 1,270 primary schools were destroyed, and as a result, in 2001, 67% of all school-aged children were out of school. Since then, the country has made some big steps and the situation has improved significantly. Between 2001 and 2005, primary school enrolment has doubled and since the end of the war many schools have been reconstructed. Although the number of children in primary education has greatly increased since the end of the civil war, according to the UNDP Human Development Report 2016 , the rate of completion of children in primary education is only 47,8%. The rate of educational completion of girls is even lower, partly due to cultural beliefs in some areas of Sierra Leone where education for girls is not supported.

The quality level of schooling is poor in all aspects. Teachers are ill equipped with resources and they often do not possess appropriate teaching skills. As a result, the education level of students is far below the level of their western peers. This is one of the main reasons for the high unemployment rate among Sierra Leonean youth.

Sierra Leone’s tertiary education system is not in a much better condition. The polytechnic institutions are supposed to provide the technical and vocational education as well as training programmes. However, they have not been able to effectively help young people find and keep a job. Often due to the lack of quality education, but also due to the high fees which students have to pay for their courses. A lot of youths find themselves without actual practical skills.

Skilled labour is highly valued and in demand by employers. There is especially a high demand for well-trained and mid-level professions, like teachers, electricians, technicians and computer programmers. But unfortunately, for most young people the combination of the poor quality of their education, the lack of social skills, parental or environmental encouragement and critical thinking, result in long-term unemployment. 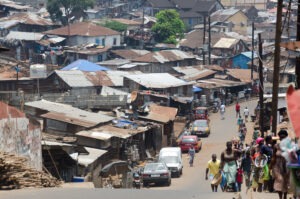 The unemployment rates are high in Sierra Leone, with an average of 70% of the youth (15-35 years old) being unemployed or underemployed. An estimated 800.000 youths were searching for jobs in 2012. Especially in the urban areas young people struggle to find meaningful employment. Young people in the cities are three times more likely to be unemployed than their rural peers.

Sierra Leone society still reflects great gender-biased inequality with only 16.8% of adult women having accessed secondary or higher education, compared to 29.7% of men (UNDP). Only 30% of youth between are active on the labour market. 32.6% of youth are illiterate and/or unskilled. For this group, it is especially hard to find a job, and enjoy a sustainable life and income. Often these youths turn to the streets and try to sell or trade something to make a living. Some engage in a life of crime and/or prostitution, leading to a number of problems within the country, like teen pregnancies and a rise in crime. A decade after the end of civil war, the UN has said that mass youth unemployment poses a great threat to the country’s peace and stability.

Within this gap, Schooling for Life is going to make a difference. With the “Skills for a Successful Future” programme, Schooling for Life wants to deliver well-trained young people to the labour market of Sierra Leone. Schooling for Life will improve vocational capabilities and stimulate critical thinking with the ultimate goal to equip a young person to become a productive member of society. Therewith, assisting with the reconstruction and development of the country. 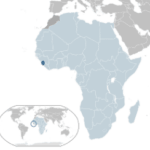